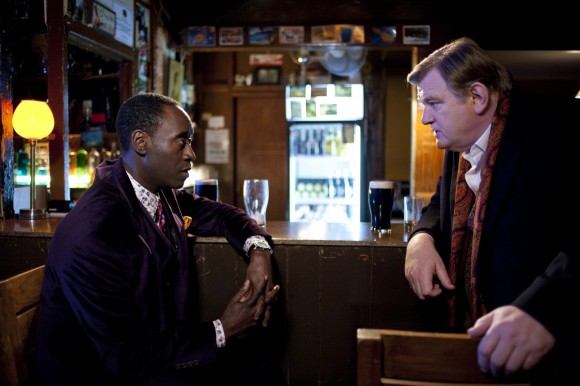 Our "Sundance First Look” series would not seem complete if we did not include the film that is kicking off the World Cinema dramatic competition. John Michael McDonagh, who has been idle in the film world ever since he produced the screenplay for 2003's NED KELLY, makes his directorial debut with THE GUARD. McDonagh, who also penned the screenplay, had some acting powerhouses at his disposal, Brendan Gleeson and Don Cheadle.

The Irish film has been described as a thriller-comedy and one cannot help but wonder how much comedy will be involved. Will it be a dark comedy, similar to Gleeson's outstanding 2008 film, IN BRUGES, or will it tread a lighter path? After reading Sundance's official synopsis, I cannot help but picture a dynamic of Gleeson's Gerry Boyle character and Cheadle's FBI agent that is similar to Rod Steiger and Sidney Poitier in IN THE HEAT OF THE NIGHT. We should be so lucky.

Official synopsis:
Sergeant Gerry Boyle, a salty village cop in Ireland, has a subversive sense of humor, a caustic wit, and an uncanny knack for keeping people at arm’s length. When a straitlaced FBI agent chasing an international drug-smuggling ring hits town, Boyle has no intention of letting the arrival disrupt his routine of hookers and wisecracks. Initially, he relishes offending and ridiculing the agent, but a murder and a series of peculiar events draw the reluctant sergeant into the investigation.
John Michael McDonagh’s crisply written debut feature transcends the rules of the buddy cop comedy, wryly offering genuine humor and thrills against an unexpectedly moving portrait of its protagonist. Brendan Gleeson’s beguiling portrayal of Boyle defies easy definition as hero or buffoon, hinting instead at the lonely, intelligent man behind the sharp retorts. The Guard is a clever, fresh character study, as well as a snappy joyride of an action comedy.

This seems quite promising. You can count on one hand the number of clunkers that Gleeson and Cheadle have been in, and Sundance has chosen it to be the first feature length non-documentary of the festival. That certainly has to be an auspicious sign of promise. How McDonagh balances the humor from the drama will be the true question, and my curiosity in his method has certainly been piqued.